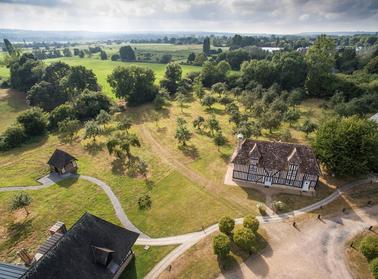 In 1960, Christian Drouin senior became the owner of the Fiefs Sainte-Anne on the Gonneville hills, near Honfleur. The farm was planted with cider-apple trees and Christian was soon seized by the desire to produce his own calvados and cidre. In 1969 Christian Drouin junior went into partnership with his father.  Christian envisaged a quite different future for his spirits. He was fascinated by the art of aging and, with the benefit of the stocks produced by his father, he specialized in the production of the rarest and oldest calvados that he was soon delivering to the world’s great hotels and finest restaurants. In 1991-92, to meet the need for more space generated by the success of the firm, he transferred production to another 17th-century farm in Coudray-Rabut near Pont l’Evèque.  In January 2004 the third generation joined the firm. Guillaume Drouin trained as an agricultural engineer and wine-maker. He devoted his first five years in the business to developing exports before taking over production management and then general management of the company in 2013. Today the blends are still created jointly by Guillaume and his father.